The Sernett readings from Cone and Jones were greatly inspiring to me. Both authors reiterate the importance of economic development within black church communities as significant for gaining political agency for African Americans. They are concerned for the future, particularly in regards to the role and further involvement of youths in the church community. Arguing that following  the 1960s Civil Rights Movement, the strength of church communities began to wane. There is a clear call for modernization within the church; Jones calls for churches to become “bilingual: it must understand the language of the world and translate the gospel into the idioms and symbols of that language” (585-6). Although church community strength has decreased, Jones is especially hopeful for the future due to the demands of young people for education and expanded leadership opportunities, however, he states “the most significant development in recent years has been an increasing awareness among blacks not affiliated with the churches that religious institutions are as critical to the survival of Afro-Americans in the present as they have been in the past” (588).

Throughout the readings in this class, a single thread runs through all of them – there is no one way for black people to be religious; there is no singular “Black Church.” They have different identities. This country is too big and African-American history is too rich for this issue to be simplified this way, and it’s unfair to refer to what you believe to be the “singular black religious experience” as the Black Church or “their religion.” If white people are allowed to have thousands of different religious experiences, why should it be any different for any other race? There are black churches, but there is no Black Church. All of that religious history deserves recognition.

James H. Come starts off by discussing the important role that black theology has had in the liberation of African American, and that it was something that was created out of necessity because white Christian theology was not invested in the rights of African Americans. Yet, still with the ever changing social situations it is important for churches to alway be aware and engaged with the current political climate. Come, I believe rightly so, makes the argument that it is not possible to discuss the issue of racial oppression without addressing the other systems and institutions of power the lead to that hierarchy. Racial oppression, national issues, and economic issues are all part of the same web. Racism and capitalism are the systems that are codependent on one another. That is not to say that simply one is the result of the other, but rather that each one helps uphold the other. One can not discuss the issues of capitalism without discussing systemic racism, and one can discuss systemic racism without discussing the issues of capitalism.

After reading Jones’s “The Black Churches: A New Agenda”, the first thing it made me think about was Greenleaf, the show about black churches on Netflix. Now obviously, the black church isn’t always like that, but some of the things mentioned, like not talking about broader issues and everything being divided into the denomination and causing some conflict is definitely what we see now. The brother’s we are supposed to look out for end up turning their backs on us and it is so wrong.

Talking about big issues in the black community like mental health and homosexuality will always be an issue, but it is starting to become more vocal. Slowly, but surely.

In Sernett chapter 58, we delve into what black theology is and how it coincides with religion. James H. Cone describes how black power was not liked at first because it went against black theology and black churches. Because black theologists were often in white spaces and were taught by white people, going against all of them that black power presented was like going against everything that they knew. Black theology eventually became defined a “theology of black liberation” (Sernett 571). This new definition came from Cone from his book Black Theology and Black Power. In the past, there was a conflict of interest; there were statements that black power was against Martin Luther King Jr. The black church was involved in the black liberation movement of the past, but today they are no longer as required.

There were quite a few parts of this week’s readings that stuck with me as I read. The first is the line, “To accept Black Power as Christian required that we thrust ourselves into our history in order to search for new ways to think and be black in this world. We felt the need to explain ourselves and to be understood from our own vantage point and not from the perspective and experiences of whites.” (Sernett 569). I found this section to be reminiscent of a theme that has been easily found in many, if not all, of our readings thus far this semester: the importance of identity. So much of what we’ve read and discussed has related back to the need for an identity to belong to, and the dignity and honor associated with that identity. A similar theme can be seen later in the chapter: “Since humanity is one, and cannot be isolated into racial and national groups, there will be no freedom for anyone until there is freedom for all. This means that we must enlarge our vision by connecting it with that of other oppressed peoples so that together all the victims of the world might take charge of their history for the creation of a new humanity.” (Sernett 574-575). This, to me, spoke of each person’s individual identity, and what it means to be a part of a group and protect one anothers’ identities.

A different but not unconnected theme is found later in the chapter. Along with the theme of identity is the idea of pride, and the pride that comes from having an identity and a reclaimed history. One quote that I found that spoke of this idea was: “We simply reject the attempt of others to tell us what truth is without our participation in its definition.” (Sernett 576-577). This quote stood out in that it was blatant and simple, but exceptionally determined.

In this chapter they discussed the stereotype of the “Black Church” stating that “There are denominations, composed of congregations of black persons and under their control, and there are countless free-standing congregations, but there is no entity that can be called the black church” (582 Sernett). Even though this is very true I strongly believe their is a difference with how different ethnicities and cultures choose to worship. With that said I also believe that there’s something special about finding the right church because when you do you immediately know and you’ll feel right at home. 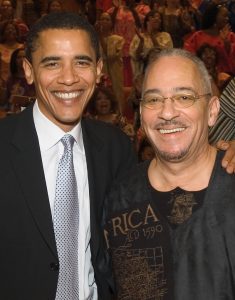 Out of every reading we have had this semester, Harvey’s epilogue was one that I could relate to the most. I enjoyed his pop culture references and reading his analysis of what occurred with Jeremiah Wright situation. His explanation of the gospel of hope and religious anger was an attention getter. I had never heard the phrase “religious anger” but this chapter does a great job of explain what it means along with current relevant examples. Overall this chapter was amazing and it really resonated with me.

One thing that this class has been pushing since the very beginning is the fact that there is not such thing as a black church. As a society, we tend to think that there is a black church and a white church. But over this course, the literature that we have read has proven that that sterotype is incorrect. This last reading proves it as well. Just
as trees are made up of different branches and twigs, the black religious community has different congregations, communities and denominations.

I think it’s honestly pretty cool how we honestly started with something we learned on the first day: there is no one “black church” in the conventional sense. It’s nice to wrap up all of the stuff that we’ve learned by going back to something that fundamental, but now it’s been put in context by everything that we’ve read and been taught this semester.