Charles H. Mason And the Founding of The Church of God In Christ.

Every religion starts somewhere. For the Church of God in Christ, its beginnings lay in the following of Pentecostalism. However, before this would become a known denomination, many of its fundamental ideas came from the Evangelicals. The root of Pentecostalism, comes from the Jewish based holiday, Pentecost in which the followers believed this was the holiday that Jesus had given the Ten Commandments to Moses. Because of this, on this day, believers were convinced that God would return to earth, and because of this the people would now can speak in what was referred to as “tongues” which was the holy spirit speaking through the people. This ideology combined with Millennialism, which stated there was going to be a rapture when Jesus returned, created a prevalence in faith. This movement focused on gifts God could give to people, including, faith healing, speaking in tongues, and sanctification. This is also called the Holiness Movement, which developed out of Methodist thought. Speaking in tongues was also known as glossolalia , the notion that one could speak a language you never had before, or speaking in words that don’t make any sense to those around you. People who speak in tongues describe it as being moved by the holy spirit.

Photograph of a group being moved by the Holy Spirit. 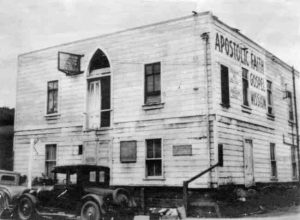 African Americans usually consider the Azusa Street Revival in Los Angeles California, led by William Seymour, in 1906 the birthplace of the movement because Pentecostal meetings were broadcast throughout the community by people that attended. It is believed that this message was given to Seymour through Charles Parham who attended a meeting. In this time, people believed in postmillennialism. This was the notion that after the melliuiem, Jesus would return to reign over the world, but in a literal sense. Christ’s rise to power be through the spreading of the gospel and the impact it had on people’s lives. However, even before Parham and his student, it was John S. Inskip and William B. Osborn, the reestablishment of Holiness camp meetings, the National Holiness Movement was created. Through these men an emphasis on “Christian Purification” , in forefather Charles Wesley mind around the late 1700’s, these ideologies of salvation through the holy spirit would lead to Azusa street, thus leading to the COGIC, which remains today the largest African American Pentecostal demonization. The reason William Seymour is important besides setting the building blocks for the COGIC, was that through his approach, race was not the biggest issue on everyone’s mind. Seymour viewed Azusa Street as a place, “among the colored people…Ethiopians, Indians, Mexicans, and other nationalities…” It is also to note the notion of “speaking in tongues” is caused a breakaway, and forming of another group known as The Old Apostolic Faith Moment. Contrast to Seymour, leader William Durham believed that sanctification was a life-long process, that was not simply achieved by speaking in tongues. 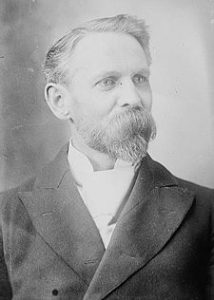 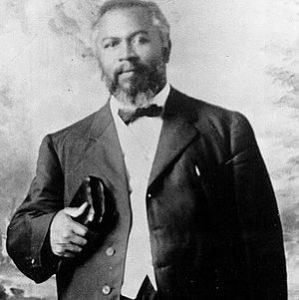 Now that the basic history has been addressed, let us turn our attention to one of the most famous figures in the founding of the COGIC, Charles Harrison Mason. born September 8th, 1886 in Shelby County, Tennessee to slave parents Jerry and Eliza who used religion to help them cope with their enslavement. Upon the influence of his parents. Mason gave his heart to God at the young age of twelve to, “…give him [Mason] a religion like the one he had heard about from the old slaves and seen demonstrated in their lives.” In 1880, according to one account, God bestowed Mason to be healed from tuberculosis, which had killed his father and forced the family to move to Preston, Arkansas. Shortly thereafter, Mason followed in the footsteps of his brother, traveling throughout Arkansas to spread his message. However, after reading the works of Amada Berry Smith, Mason began to question some of the beliefs his church had which ultimately lead him to support the Holiness Movement. With this new outlook, Mason only attended Arkansas Baptist College for a mere three months, which he had enrolled in November 1st of 1893, because he did not agree with how the Bible was being presented in the curriculum. 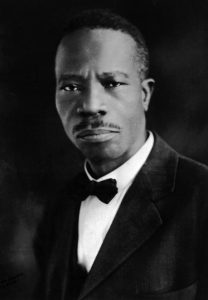 Nonetheless, in1895, Mason would be introduced to life-long colleagues Elder C.P. Jones of Jackson, Mississippi, Elder W.S. Pleasant of Hazelhurst, Mississippi, and Elder J. E. Jeter, of Little Rock, Arkansas. Together, they would assist in creating a revival in 1896, in Mississippi which would empathize the importance of conversion and sanctification of the community. However, Mason was met with open arms and this resulted in the pastors having to relocate to an abandoned shack in Lexington, Miss., which belonged to a Mr. Watson. Elder Jones, Mason, and Pleasant were elected as charter member of their new congregation, which was named Church of God, and all the Elder’s presided over different states. Mason was charged with overseeing Tennessee. Mason however, wanted to have another name for their church which would set them apart, and this was accomplished in 1897, when he was on a walk in Little Rock where it suggested Church of God in Christ was revealed to him in reference to the Bible verse Thessalonians 2: 14: “For ye brethren became followers of the Churches of God which in Judea are in Christ Jesus: for ye have suffered like things of your own countrymen even as they have of the Jews.” All of the brethren unanimously agreed to the name of “Church of God in Christ.”

However, when Mason traveled to Los Angeles in 1907, to be a part of the rival held on Azusa Street with leader William Seymour, Mason became convinced that a part of sanctification had to be the result of the Holy Ghost, which would lead to speaking in tongues. For Mason, according to his personal account, he was able to do this effortlessly due to hearing Seymour’s revival, which resulted in him stepping upon the alter and singing, “He Brought Me Out of Miry Clay.” Upon returning home to discuss the events that he had witnessed, Elder and Jones dismissed Mason’s experience of speaking in tongues delusional. Subsequently, a meeting was held in Jackson, Mississippi, and Mason was expelled. To preserve his respected status, Mason again called a meeting Tennessee, in 1907, asking all those who believed in receiving salvation through the Holy Ghost (speaking in tongues) to claim their beliefs. Because of this assembly, Mason was appointed the first chief overseer of first Pentecostal General Assembly of the Church of God in Christ. After ten years, COGIC became the first legally recognized Pentecostal body in the United States. From its beginnings in 1906, this denomination went from being merely ten churches, to having more than six million members in over sixty countries.

In the 1980’s Mason married a friend of his mothers, Alice Saxton, however the marriage did last long because she did not approve of his preaching career, and the devoiced two years later. Shortly thereafter, after her death, Mason vowed not to marry again, but this proved to be short-lived when he wed again a year later to Lelia Washington in 1905, with whom he bore six children. In 1943, after Washington’s death, Mason was married a final time to Elsie Washington (not related to his second wife), who died in 2006. Rev. Mason himself passed away November 17th of 1961, in Detroit, Mississippi, leaving behind the legacy of being of one of the longest serving founders of an organization having presided for fifty-one years.