I am confident that thousands of saints of the Church of God in Christ will join me and answer the call to extreme commitment to the Great Commission through radical, relevant, and innovative worldwide ministry.

The Church of God in Christ believes in several characteristic ideas of the Pentecostal and Holiness Movements, including that of sanctification. The Church of God in Christ describes sanctification as the “gracious and continuous operation of the Holy Ghost, by which He delivers the justified sinner from the pollution of sin, renews his whole nature in the image of God and enables him to perform good works” (Citation). Not only does the COGIC encourage its members to live sanctified and holy lives, the Church sees evangelization of God’s Word and works of charity and community as key to forming a kingdom of God. Since its founding, the Church has gone on to serve both domestically and internationally, with staying true to their Pentecostal roots and beliefs. 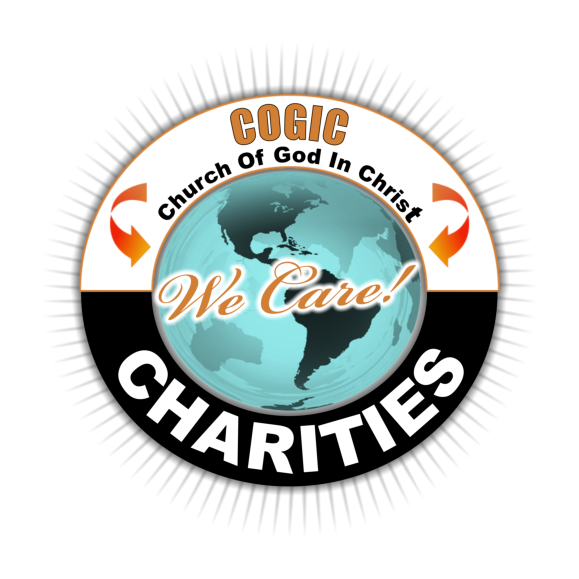 Seal of the Church of God in Christ’s Service Arm, COGIC Charities

The COGIC Charities department is the arm of the Church whose mission is to reach out to “assist humanity at a time when rising unemployment and natural disasters are devastating the lives of so many” (Citation). Most recently, COGIC Charities has been active in working with Hurricane Harvey relief efforts. The Church of God in Christ opened a 60,000 square foot “super resource center” in Houston. (2) They also held fundraisers and resource collections in almost all of their domestic churches, distributing flyers and press releases that look similar to the one below.

Founded in 2002 by then-presiding Bishop G.E. Patterson, COGIC Charities is a nationally-recognized non-profit organization. (2) Not only does the charity focus on providing relief after disasters, but they are proactive donors to Salvation Army, the Horn of Africa Relief and Development Organization, the United Nations Food and Agriculture Organization and the American Heart Association. (3) The charity focuses on four main areas of service to the national and international community: Disaster Relief, Scholarships, Community Unity Drives, and Special Programming in conjunction with corporate partners. COGIC Charities awarded, through their scholarship programs, $110,000 in 2008 to eligible students for higher learning. (4)

The COGIC’s Urban Initiatives program has a goal to “build strong individuals, families, and communities for a successful future” (5). It is a recent development of the COGIC, created by presiding Bishop Charles E. Blake. He decided its importance to his Church out of a concern for poor academic achievement, financial disenfranchisement, high unemployment, soaring crime levels, the desperate state of the black man and the breakdown of the family that plagues our cities, small and large, urban and rural” (6). The COGIC Urban Initiatives is an active program in almost all of the 12,000 domestic churches.

The Urban Initiative focuses on creating programs for improvement in education, economic development, crime prevention, family life, and financial literacy. Bishop Blake’s goal is each church will have every single one of these programs, for a total of 60,000 United States Urban Initiative programs (7). Congregation members of all ages, settings, economic classes, and genders have come together to create a successful future for not only their youth, but for others in need, as they say God called them to do.

The Church of God in Christ is one of the oldest Pentecostal denominations in the world, with churches in 82 countries worldwide and a membership of nearly 6.5 million adherents. Much of this was done through their International Missions Department. “COGIC World Missions is a movement of the love and compassion of Jesus Christ” (8).

In 2017, the COGIC sent over 900 volunteers across the United States and South Africa to participate in the Awakening Project. The group of was able to complete approximately 6,000 hours of community service work, reach over 10,000 people in various communities, and “lead over 700 souls to Christ” (9). The Church of God in Christ continues their work globally, on almost every continent, to spread the Word of God as they see their call to do.

Seal of the COGIC Department of Evangelism

The COGIC International Department of Evangelism exists to serve God and spread His mission throughout the world. The department believes in the message of Mark 8:36-37: “For what shall it profit a man if he shall gain the whole world and lose his soul? Or what shall a man give in exchange for his soul?” (10) The COGIC International Department of Evangelism seeks to save “lost souls around the world,” through international missions, as well as domestic prison ministry.

There are essentially four main goals of the Department of Evangelism. The first is to train ministers to become Evangelist. The second is to recruit young ministers who can better relate to the “youth population” and share with them the great “Pentecostal Experience of Salvation.” The Department also has a vision to create an evangelistic revival plan parallel to the spiritual revival that occurred at Azusa Street. This revival will catapult thousands into: repentance, justification and sanctification. Lastly, there is a hope for the creation of an “International Family Day of Evangelism.” This Sunday will be for COGIC Churches throughout the United States and worldwide to invite their family members to Church and present to them the plan of salvation. (11)

The COGIC International Department of Women plays a key role in service. Only women are allowed to be formal missionaries for the International Missions Department. There is also a huge role that women play in the education of youth and young adults within the church community.

The Women’s Department’s Prayer and Bible Bands, founded by Mother Lizzie Robinson, were the earliest forms of education within the Church of God in Christ (12). Later, Saints Industrial was founded in 1918. Eventually, the school would thrive under the leadership of Dr. Arenia C. Mallory, “bring[ing] COGIC women and the denomination squarely into twentieth-century modernity and the mainstream of African American life” (13). In conjunction with Alpha Kappa Alpha sorority, the oldest black sorority in the United States, Mallory began both educational and health programs for the local Lexington, Mississippi, community (Citation-Butler109). Eventually, Mary McLeod Bethune became friends with Mallory, and together, their “shared belief that sanctification empowered them spiritually for service…[a] desire to educate the race…feel[ing] it was a higher calling, a calling from God” (14). The Saints School became officially associated with the COGIC in the minds of many, and it went on to be successfully operated under Mallory’s leadership for years. The Church of God in Christ even formed a Board of Education to assist with Saints School, as well as their rapidly expanding Sunday School programs (15).

The core of the Church of God in Christ, sanctified living, required “serving and educating others” (16). The focus on education by the Women’s Department encouraged a new generation to become productive and active members of the church and larger African-American community, and created the new idea that not only could Holiness change someone’s life, but it could be used to change others’ as well (17).

(8) The Church of God in Christ, Inc. World Missions – About, accessed November 22, 2017, http://cogicworldmissions.org/about/

(10) The Church of God in Christ, Inc. International Department of Evangelism – About Us, accessed November 22, 2017, http://www.cogic.org/evangelismdepartment/about-us/.