While the Free African Society itself was rather short lived, the organization’s religious impact reached many in the community. The society’s two founders, Richard Allen and Absalom Jones, were both prominent pastors in the Philadelphia area. The society was originally meant to be a mutual aid and interdenominational religious organization. The society followed many Quaker principles and followed ideas such as visiting members’ homes to insure they were living morally, though in its core the group was nondenominational and welcoming to many faiths.

Richard Allen eventually became disillusioned to the Quaker parts of the society and broke away to form the Bethel African Methodist Episcopal Church, taking many members with him. In 1794 the remaining members built their own house of worship, the St. Thomas African Episcopal Church, of which Absalom Jones was the first pastor. Both churches became incredibly important religious and cultural centers for the free black community. 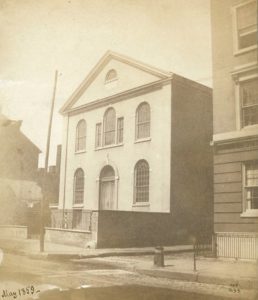 The original location of the St. Thomas African Episcopal Church.