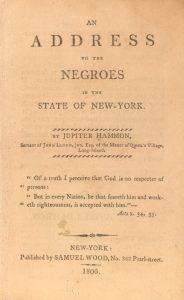 Jupiter Hammon lived during a time of monumental change and chaos. He lived through countless changes in religious practices, the beginning of a long-standing question of identity among African Americans, and the rise of many famous names and influences that are still discussed today. Despite all of the uproar that surrounded him, Jupiter Hammon remained steadfast in his religious beliefs and encouraged those around him to remain faithful as well. He serves as a prime example of someone who kept their footing despite the turmoil, and went on to be a great influence on many who came after him. Serving under three generations of the Lloyd family, Jupiter Hammon was the first published African American poet. Jupiter Hammon’s time was fraught with conflict and controversies. From religion to identity, people disagreed on what was appropriate and where people belonged. It was a pivotal time for religion, and people saw many setbacks and obstacles on the way to change. Despite all of this, Jupiter Hammon remained determined and strong, and his devotion inspired works that influenced many.