Saint Thomas Baptist Church started out as a Sabbath school in the home of M.E. Johnson. Her father, James L. Thomas, directed the school. On the third Sunday of July 1895, Doctor C.H. Phillips turned the Sabbath school into a Baptist denomination. On the first Sunday of October 1896, after Thomas’s passing, Phillips changed the name to Saint Thomas Baptist Sunday School. The school continued on in the William Green household and grew under the leadership of Mrs. Johnson and others. 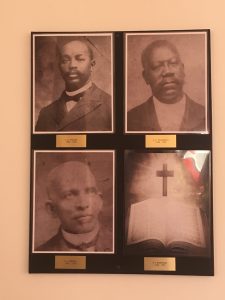 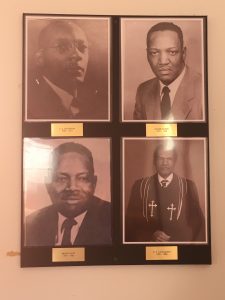 (Above are photos of the past pastors and how long they have served there.)

In the spring of 1897, Dr. Phillips had a student missionary, Reverend O. C. Smith join others to fundraise for a church building. With the direction of Rev. Smith, the church received what was known as the old brick store at the railroad tracks as their meeting place. Getting the build was free, as it was previously owned by C. W. Bumpass. Two services were held every Sunday. Sunday School was in the morning, followed by prayer and praise services in the evening.

Sometime later, R. G. Thomasson, a merchant in Bumpass, donated half an acre of land to the church. On September 2, 1897, the church was properly organized. It was in the Groves connected to Brother Samuel Dennis’ home with nine members. On September 7th, the church went on record as an organization.

Gained information from interviews with Gloria Coles and Jane Mallory.