The thing that’s so interesting to me about Jarena Lee is how much her story reads like a novel, and honestly, just how relatable it could be to my generation if retold.
She begins with her backstory, and this entirely reads as someone with major depression. She speaks at least three times of her want to kill herself, and while she says that it’s directly from the devil, one would be hard-pressed to provide an explanation as to how depression isn’t from the devil if you believe in that. This is the set-up, the exposition. She then talks about the conflicts she endured while trying to come to Christ– rising action and initial conflict. An especially eye-catching part of this is when she is given a novel to read instead of being allowed to read the Bible, as it sets up a direct human v human conflict. She also has visions of not quite a person v God conflict, but its inverse. Finally the setup is done when she is sanctified by the Lord in a secret place, away from both man and I guess the devil, has a moment of conflict, and then is a Christian. It’s a very normal setup to see within a novel.
You then have the main plot, which is her call and action to preach, and a subplot: her marriage. Finally, the rising action culminates in her being vindicated by her former mentor and going on to preach a sermon on the following Sunday that brought members of the congregation to tears. Then you’ve got a moment of falling conflict while she talks about the rest of her life continuing to preach in various places to various congregations: a happy ending of complete resolution.
This follows very well the traditional story arc of a novel, with mini-climaxes of conflict rising towards the major conflict’s resolution, and then falling action from there, with at least a bit of exposition at the beginning and follow-up at the end. 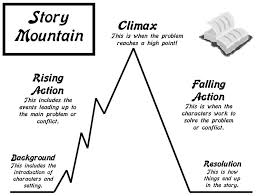 When I was a student author, this was the type of chart I was taught, and it amazes me how closely Lee’s story mirrors this chart.
You could easily make a novel or even a movie out of this by dramatising the conflicts between her and the devil, her own inner struggle with depression, and her fight to actually be allowed to preach as a woman minister. It’s really cool.