Called “mysterious Afro-Christian syncretized religions,” in the Fanthorpe reading, Santeria and Voodoo (Vodun) are much different than what people expect. Perhaps people’s misconceptions and misunderstandings lie in the lack of real written histories and material. The traditions are still largely oral, passed from generation to generation. Some people see these traditions, Santeria and Vodun, as witchcraft or satanic, but that assumption is largely false. The two are also seen as synonymous, which would also be wrong to assume. Just because they are both African Diasporic Traditions does not mean their belief systems and structures are even close. I located the Santeria Church website, and they identify the differences between the two faiths, for a further explanation to what the chapters given explained.

While Christianity has the idea of “good versus evil dualism,” Santeria does not. Instead, the “universe is subject to opposing forces such as expansion and contraction (which are not of themselves good or evil)…everything in the universe has positive attributes (Ire) and negative attributes (Ibi).” When I read this, I thought it made more sense than what I’ve largely been taught or read through Christianity. It’s easy enough to say in Christianity that God is good and the Devil is bad, and you either are saved or a sinner. There is no room for gray areas. Though as we’ve seen, it’s much harder to put this into action. But with this Santerian idea, that the universe, and subsequently humanity, are on this spectrum of positive or negative, giving or taking, it allows for the inevitability of some people to be human. It’s about creating “right character,” and living a right life. This is a very Christianized idea, the idea of living a Christ-like life, but Santeria seems to give it a more community-oriented, human-oriented spin, likely connecting to the African roots of it.

Both of the chapters also discussed the idea of religion and studying religion in general. The Fanthorpe chapter described religion as “an attempt to understand and explain the universe and the vast forces within it, to control or influence those forces, and to influence human thought and behavior.” I found this an incredible definition, because it includes everything, and it doesn’t necessarily assign divinity. I also thought the idea presented in the chapter from “Where Men are Wives and Mothers Rule,” that religion has a “presumption of maleness until otherwise said,” is something people don’t tend to think about. Abrahamic religions assign male attributes to God, and all important, frequently-discussed figures are males. The role models offered are all essentially male. Santeria’s practice of creating this instead female-normative system is something that I’m sure caused its controversy, but also gained it some powerful, strong women to work and lead within the community. 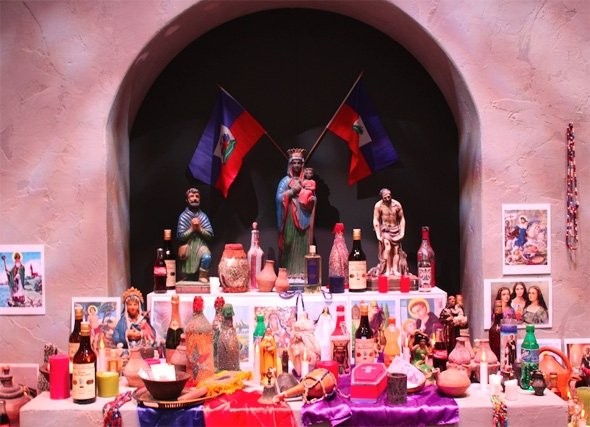